Teaching myth #1: teachers are lazy because they get massive holidays (at least, compared to the 4 weeks of annual leave that most workers in Australia get). This myth is perpetuated because it’s half-true (yes, we do get a relatively large amount of leave – roughly 11 weeks of breaks between school terms), but it’s not true. Teachers who are idle during their school holidays are the exception, not the rule. Case in point: here I am in the middle of summer, setting up my new workspace during the holidays.

Okay, I’ll admit that (especially given the new step-up in responsibility involved in my new role) it would have been plain foolish to not come in during the holidays to bring in all my resources and arrange my desk before the school term begins officially. Here’s how it looks at the moment. 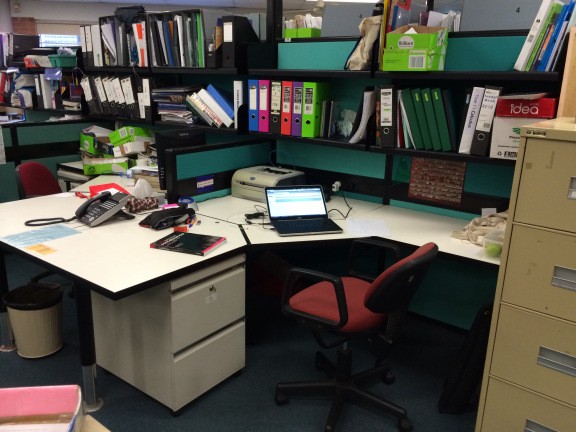 The staffroom I’m working in is quite different to the one at my previous school. It’s a combined staffroom, housing 4 faculties (Science, Technology, Creative & Performing Arts, Mathematics) and 67 staff. It’s not the first time I’ve experienced this kind of arrangement – Fort Street High School (where I did a practicum and subsequently had my first full-time job) also has combined staffrooms – but the scale of this one is still something to behold.

Click the photo above for a bigger version. This image is a pair of panoramas combined together, but the stitching in the middle isn’t perfect. It’s still good enough to get a sense of the working environment, though.

View all posts by Eddie Woo

One thought on “My new workspace”