Hey class – as promised, you can view the worked solutions to your Matrices Quiz. Complete your corrected solutions and then start working on the AT5!

This entry was posted in Mathematics and tagged exploremaths.

I’m endlessly searching for new ways to present and engage with old ideas. Some of the most wonderful experiences come from seeing or working with familiar things in a new way. So I was delighted when I discovered the game Nuxo on the iOS App Store recently.

It’s a simple game and if you’ve got an iOS device you can go ahead and play it yourself. But as I played it I realised there was so much scope for using this in the classroom. I was teaching index laws recently so I modified Nuxo into a game I call Index Noughts & Crosses. You can see how it works below:

This entry was posted in Mathematics and tagged Blog.

It has taken me a while to think of myself as a teacher who has something to offer to other teachers. In many ways I am still very young and inexperienced, and there’s no shame in admitting that – it would be a greater mistake to pretend otherwise! Yet at the same time, I’ve come to a point in my career where I’ve made enough mistakes and experienced a broad enough range of situations that I actually do have some things of value to pass on to pre-service and early-career teachers. That’s why I’m excited about ment2teach, a new initiative launched by Jennifer Michalski. 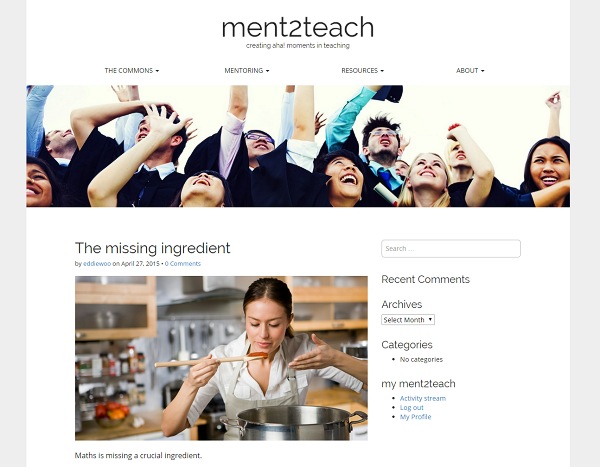 Among other things, ment2teach is a space and a platform to facilitate mentoring relationships between teachers. I know how important mentoring is – I was incredibly fortunate to have spent my first six years teaching in a faculty where basically all the staff took it upon themselves to mentor me in one form or another – and I believe it’s one of the best ways to learn. Life’s too short to learn from your own mistakes – if you want to get anywhere, you need to piggyback on the experience of others.

Apart from offering myself as one of the mentors there, I’m also contributing to the ment2teach’s blog. In fact, my post there – “The missing ingredient” – is the first one published on the site. It’s the first in a series, and over the next two weeks I’ll be posting the rest. Happy reading!

This entry was posted in General and tagged Blog.

What is the purpose of
this number system, and what are its distinctive features?

ASCII (American Standard Code for Information interchange)
encodes the English alphabet, and some other punctuation characters into a
form, that a computer would be able to read, called binary.

ASCII is very noticeable as the way to convert English
letters into binary, is through the use of a chart. Each character has its set
of 1’s and 0’s. Connecting the binary from the left and then the top, gives the
binary that will work with the computer.

Explain where and how
this number system is used today.

Originally developed from telegraphic codes, ASCII is everywhere
within this modern day world of technology. It represents every single text
that technology needs to output to the user.

What are the
advantages and disadvantages of this number system?

The use of this system is that it provides an easy way to
transfer English characters into computer language. Most modern character-encoding
systems are based on ASCII. Without the use of the chart to aid with coding, it
would be quite difficult to input the correct binary code to output the desired
character.

This entry was posted in Submissions and tagged exploremaths.

Riding the wave: why I started a new Youtube channel

I really admire intentional people. I mean the kinds of people who think about what they want to achieve, set goals to get them on the right path, and then go out to strategically accomplish their objectives. Those people inspire me: they show me what’s possible when you set your mind on something and then pursue it with all your strength and discipline.

But I’m not one of them. At least, I definitely don’t feel like one. Many of the things I would consider my greatest achievements have arisen from things that took place accidentally or out of my control. I feel like a surfer who just happened to be at the right spot at the right time to ride a wave into the shore.

For instance, my Youtube channel – which is what I’m most well known for at the moment – was never intended for wide public consumption. I started shooting and uploading videos for just one boy I taught two years ago. He was very unwell and missed huge amounts of school due to hospital visits, so I put things up on the channel so he could keep up with us when he was away. This is a little embarrassing now, but I initially made the videos public simply because I didn’t want to deal with the headache of adjusting privacy settings on every single thing I uploaded!

Since the videos were freely available, others started asking if they were allowed to watch too. It started with the other students in my class – no one else knew I was doing this, and they only knew because they saw me setting up my recording equipment each lesson. From there, it spread to students in other classes, mainly Extension 2 students who had glossed over the 2-Unit topics in class and wanted an actual explanation of things like Series and Sequences. And before I knew it, students from other schools – and even other countries! – were watching along.

All of this blew me away. As I said, none of it had been intentional. I never set out to have a popular Youtube channel; it just kind of happened by itself. But at the same time, it wasn’t all that surprising. Mathematics is, at its essence, the same everywhere – and in fact for most of school across the world, it’s compulsory – so it wasn’t that unusual that I found a wider audience of students. What surprised me most, though, was when the people who commented and emailed me weren’t students. They were teachers.

Why would teachers be watching my videos? The videos are aimed at students, not educators. But then I realised why it made sense. In mathematics – not to mention a hundred other areas of human endeavour – one of the key ways to learn is by example. Yes, you can explain the concepts or principles as much as you like – but what does it look like when you _use_ those principles? What do those concepts look like in action? This is why observations form such a helpful part of initial (and continued!) teacher education: there’s nothing quite like seeing someone else actually do something to help you wrap your head around how you might do it.

And that’s what my videos were helping to provide. Just one example of how to go about explaining things. Not the only way, nor the best way – just one way. And apparently there’s a need out there for this kind of thing. Then I thought to myself – are there things I would say to or upload for teachers if I had a channel just for them? And I realised the answer was yes.

So, in light of the opportunity that’s standing right there – to offer practical and thought-provoking content to hundreds of pre-service, early career and even experienced mathematics teachers out there, for free – I’m starting Wootube²: videos for anyone and everyone interested in mathematics education. I’d be lying if I said I have a huge amount of time to invest in the channel – this is most definitely a side project – but I already have tons of ideas for material to post that I hope will be helpful in developing teachers and cultivating constructive discussion around teaching and learning mathematics. If you are a maths teacher and you have ideas or requests for things you’d like me to do on the channel, please contact me and let me know. Otherwise, subscribe and stay tuned!

This entry was posted in Mathematics, Videos and tagged Blog.